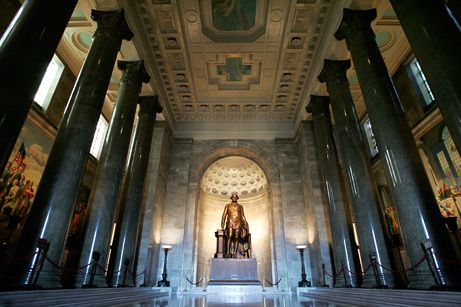 “I have heard much of the nefarious, and dangerous plan, and doctrines of the Illuminati” – George Washington – 1798 original letters can be seen on the Library of Congress website (search for illuminati)

Sir: Many apologies are due to you, for my not acknowledging the receipt of your obliging favour of the 22d. Ulto, and for not thanking you, at an earlier period, for the Book8 you had the goodness to send me.

I have heard much of the nefarious, and dangerous plan, and doctrines of the Illuminati, but never saw the Book** until you were pleased to send it to me. The same causes which have prevented my acknowledging the receipt of your letter have prevented my reading the Book, hitherto; namely, the multiplicity of matters which pressed upon me before, and the debilitated state in which I was left after, a severe fever had been removed. And which allows me to add little more now, than thanks for your kind wishes and favourable sentiments, except to correct an error you have run into, of my Presiding over the English lodges in this Country. The fact is, I preside over none, nor have I been in one more than once or twice, within the last thirty years. I believe notwithstanding, that none of the Lodges in this Country are contaminated with the principles ascribed to the Society of the Illuminati. With respect I am &c.

Sir: Your favour of the 8th instr. is received, and I thank you for your obliging attention to the articles promised me, when I had the pleasure of seeing you at this place.

……………….It was not my intention to doubt that, the Doctrines of the Illuminati, and principles of Jacobinism had not spread in the United States. On the contrary, no one is more truly satisfied of this fact than I am. The idea that I meant to convey, was, that I did not believe that the Lodges of Free Masons in this Country had, as Societies, endeavoured to propagate the diabolical tenets of the first, or pernicious principles of the latter (if they are susceptible of seperation). That Individuals of them may have done it, or that the founder, or instrument employed to found, the Democratic Societies in the United States, may have had these objects; and actually had a seperation of the People from their Government in view, is too evident to be questioned.

My occupations are such, that but little leisure is allowed me to read News Papers, or Books of any kind; the reading of letters, and preparing answers, absorb much of my time.

To THE COMMISSIONERS OF THE DISTRICT OF COLUMBIA
Mount Vernon, October 27, 1798.

Gentlemen: When Mr. Blagden came here yesterday with your favor of the 25 inst, and the plans, specification &c. of my houses I was out on my usual ride about my farms, and when I returned home, I found Company, which prevented my answering your letter by him.

The sketch of an agreement enclosed in your

George Washington as a Freemason

“Being persuaded that a just application of the principles, on which the Masonic Fraternity is founded, must be promotive of private virtue and public prosperity, I shall always be happy to advance the interests of the Society, and to be considered by them as a deserving brother.” WASHINGTON LIBRARY CENTER FOR DIGITAL HISTORY DIGITAL ENCYCLOPEDIA FREEMASONRY https://www.mountvernon.org/library/digitalhistory/digital-encyclopedia/article/freemasonry/