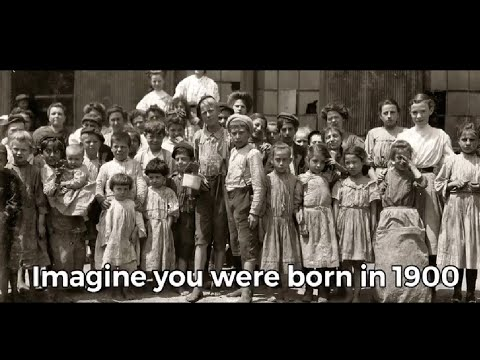 Later that year, the Spanish flu epidemic hits the planet and runs wild until your 20th birthday. A total of 50 million die from it in two years..blog

On your 29th birthday, the global economic crisis that started with the collapse of the New York Stock Exchange, causing inflation, unemployment, and famine Great Depression begins. Unemployment hits 25 percent here in America and higher worldwide, The World GDP drops 27 percent. The economies of all of Europe are virtually destroyed leading, in large part, to the rise of Fascist dictatorships in Germany and Italy.

On your 30th birthday, the “Dust Bowl” begins. For the next 10 years the worst drought in recorded in U.S. History destroys an entire region.

– A year later at 31, massive dust storms hundreds of feet high carry the topsoil from Oklahoma to Washington D.C. There is a mass exodus from the plains states of Oklahoma and west Texas. Food becomes scarce. The country nearly collapses.

When you’re 33 years old the nazis come to power.

When you’re 39, World War II begins and ends when you’re 45 years old with a 60 million dead. In the Holocaust, 6 million Jews die.

Between your 39th birthday and your 45th birthday, between 70 and 85 million people will perish. Europe and Asia will have great cities totally destroyed. Atrocities thought unimaginable just a few years ago will have taken place.

In your 41st year, the U.S.A. is attacked at Pearl Harbor and you’re pulled into WWII. If you’re a male – even at 41 — you will most likely be a volunteer to fight. You may even see your sons volunteer and be sent off to war. If you’re a woman you will see, your husbands, brothers, and maybe your sons go off to war with a distinct possibility you will not see them for four years. Or maybe never.

— Close to your 62nd birthday you will witness the Cuban Missile Crisis and hold your breath as you watch the world coming as close as it ever will to a nuclear holocaust. Life on our planet almost ended

When you turn 75 the Vietnam Wars ends and America is disgraced. Our politicians have disgraced themselves, Our “trust” in our government will never be the same.

A child born in 1985 thinks his grandparents have no idea how difficult life is, but they have survived several wars and catastrophes.

Today we have all the comforts in a new world, amid a new pandemic. But we complain about so many things like the selfless act of wearing a mask. We complain because we must stay confined to our homes where we have food, electricity, running water, wifi, even Movies & TV! None of that existed back in the day. But humanity survived those circumstances and never lost their joy of living.

A small change in our perspective can generate miracles. We should be thankful that we are alive. We should do everything we can to encourage Joy & protect and help each other.

Keep in Mind when you were born in 1900 – there was no — NONE, ZERO — paved highways, radio, TV, electric appliances, indoor plumbing. Personal hygiene was washing your hair once a month and taking a bath once a week. Men grew beards because shaving was just too time consuming and dangerous. As a woman, everything you consider “normal” in personal hygiene standards and sanitation did not exist. Really think about that for a minute.

The average life expectancy of a man was 45 years, Most doctors didn’t graduate from college. They went to medical schools. If you didn’t kill it or grow it yourself, you didn’t eat it. That means you, your spouse or someone in your family killed and gutted some kind of animal every week. There were no “teenagers.” You went to work at 8, 9, or 10 years of age and if you were a boy, most likely you were going to do what your dad was doing for the rest of your life. As a female, you were expected to clean, wash clothes, cook, and do most domestic chores. Schooling was an option only for a VERY few. If you made it to 20 without being married and having children you were considered a “spinster.”

So, again, no disrespect to those out there dealing with this virus. But instead of holding our heads in our hands and thinking “poor, poor, pitiful me,” think of how tough our parents, grandparents, and great-grandparents were. Suck it up, quit being a snowflake, and let’s beat this thing. And while we try to find a cure, understand that life is full of risks. For those that came before us life was a risk. If we’re young enough and strong enough, let those of us that wish to take that risk.

Based on a piece by ROBERT SPAITE, Columbiana